Bryan Klahn isn’t a bad guy.  In fact, in the time frame that I knew him, he was a really fun guy with whom to hang out.  But being a nice guy didn’t stop him from backing his Toyota truck over my camp stove.  Maybe it was partially my fault, although I did move it out of the way.  If memory serves me correctly he was distracted in his backing up process and his back tires found their way over my stove.

The MSR Whisperlite had a long history.  It was probably 2003 when he crushed it and the pot that was over top of it.  It had replaced my first stove, a Coleman Peak 1 Feather 400.  That was a stove that had served me well on many miles and nights of backpacking.  It was  January of 1998 when I discovered one of its shortcomings.  I was camped out on the side of Mount Lafayette in New Hampshire’s Franconia Notch.  After a long day of snowshoeing I settled in to make dinner.  Lo and behold I discovered that my stove did not perform well in sub zero temperatures.  That made for a cold hungry night and an eventually aborted backpack across the Franconia Ridge.

Back in Durham, I hemmed and hawed and finally decided to bite the bullet.  I purchased a Whisperlite at the Kittery Trading Post.  I think I paid $60 for it, maybe a tad more.  Although I had used them before and had heard of their quality, little did I know how true those things were.

I backpacked more after that, and camped extensively.  After I graduated college in 2000 I lived out of my car for three straight years before that fateful day at Indian Creek when Bryan put his truck in reverse and backed over my stove and pot.  The stove had seen some pretty extensive use, car living and backcountry.  But it wasn’t ready to be retired.

“Whoa, whoa, shit!” is  the expression that came from his mouth.  He was on his way out, heading out of the Creek for a little bit.  He hopped out while I ran over to look at the damage.

“Oh man I am so sorry” he said over and over again.

I reached down and picked up the mangled carnage of the pot.  The fuel bottle dangled from the pot by a limp fuel line.

I just kind of stared at the stove and began to unfold the cheap, crushed aluminum pot that now encased the stove like a coffin.  Somehow the fuel bottle and pump hadn’t been hit.

I pried the pot off.  The stove was still in one piece, though mangled.  Bryan was rummaging through his truck finding his cook stuff to offer me.  I reached into the green bucket that I carried my cooking supplies in and pulled out my Leatherman.  The pliers pulled and tugged at the metal and setting the sorry looking contraption on to a chopping block, I slowly hammered everything back into a semblance of the right shape.  I dug around for a lighter and turned the fuel knob.  Fuel flowed into the spirit cup with a loud gurgle.  I adjusted the legs slightly, turned the knob off, and lit the fuel to prime the stove.  Bryan had stopped digging and just looked at me. 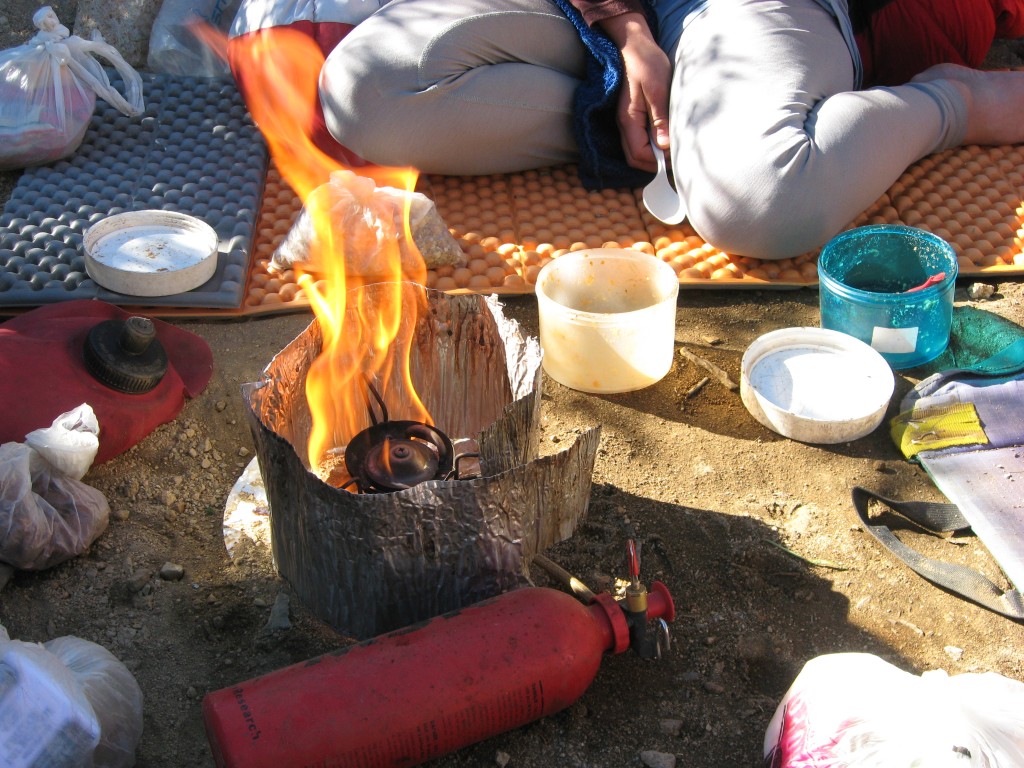 “Seems to be working” I muttered, “let’s see how it fires up.”   The orange priming flame quickly died down and I turned the fuel knob waiting for the welcoming, telling hiss.  When it came, I flicked the lighter and a hot blue flame shot out of the burner.  I smiled.

“Sweet!  I think I might need your pot though”