I roll over in bed and try to figure out what the clock hands are saying.  I wish ma would let me have a digital clock, they’re so easy to read.  Seven-nine, nope that’s not it, three of seven, no that is not right either, ahh, I got it.  Five minutes to the number.  Five, ten, fifteen. Fifteen.  It was fifteen of seven.  “Fifteen of seven!  Oh my God.  I can’t believe I slept this late.”  I jump out of bed and start throwing on clothes.  “Mom! Dad!  Wake up, it is Christmas already!” I scream running out of the room in a frantic rush, and start pounding on their door.  No answer, so I sneak a sly peak in.  Oh my God, nobody’s there.  They’ve left me on Christmas morning.  I run down the stairs, leaping the last five in a daring display of courage, and before I can make it to the tree, I see Mom and Dad sitting there drinking coffee, and reading the morning newspaper.  I stop short.
“Mornin’ sleepyhead” Dad says rubbing his hand on my messed up hair.  “Thought you would never get up, especially considering this is the most important day of the year for you.”
“Yeah, we thought you were dead” Mom said shooting a quick smile and wink at my Dad.  “Lets eat before we open presents, you only have to fire up the wood stove for pancakes, shouldn’t take more than half an hour at most.”
“Umm yeah, go on down and grab some kindling for that box” my dad said, nodding toward the metal woodbox.
This is a travesty, I can’t wait half an hour to open presents, but I know better than to argue with my Dad, especially when pancakes are involved, so I turn and head down toward the cellar stairs.  I trod down the stairs slowly hopping they will change their minds, but there is no sound.  I reach the bottom and  make a sharp  left turn towards the woodpile and there sitting where the skis usually leaned up against the wall, is a brand new BMX bicycle.

***
Christmas brings out the child in all of us even if we think we are older and mature.  It isn’t always the childhood innocence and wonder however that the holiday season brings out.  I was reminded of a Christmas event recently as I attempted to reduce the amount of clothing and stuff that still exists at my mother’s house in my childhood bedroom.

Much to my mother’s dismay I don’t get back to my old stomping grounds very frequently.  When I climbed the large granite steps and crossed the front porch to the freshly painted green door that used to be so familiar, it had been two years since I had last set foot in my mother’s house and since I had seen her or my brother.  I never “moved out” of my mother’s house, I really just left gradually.  Over the years I was in college my room changed from Roger Clemens posters and Red Sox paraphernalia to a more stylish selection of framed artwork and photographs that I had taken over the years.  Stuff got piled away in boxes and when I left for good in June of 2000 my room was tidy and presentable to the point that my mother could rent it out for guests at the bed and breakfast.  Over the ensuing 12 years it has slowly become a convenient storage area for my mother’s stuff.  Boxes, bags and piles of unused gifts, picture frames, calendars, a vacuum cleaner, and old books now make their permanent home there.  The bed gets cleaned off when word trickles in that I might be coming back for a visit and it was with a cleaned bed, but many piles that I found my room this December.  In an attempt to downsize I went through my closet and bureau filling a couple of bags with useable clothing that I had hoped to drop off at the thrift shop.  Deep in the closet under a box of art supplies, an empty tackle box, countless baseball cards and a few old nudie mags I stumbled across a box of outdoor equipment.  I pried it open and under an old “pack” tent I found my first pair of gaiters.

As far Christmas bringing out the child in everyone, those gaiters brought out the poor side of a child in me.  I got in to the outdoors early in my life and started backpacking around my freshman year in college.  As I learned about the trappings of the backpacker through experience, periodicals and texts, my Christmas list increasingly began to be composed of specialized equipment.  Sometime round about then I decided that I needed gaiters.

Years later, high on the side of Montana’s Granite Peak with my friend Kamille, I lovingly and desperately wrapped duct tape around my right gaiter to hold it closed after the zipper blew out.  We then continued to posthole and glissade a thousand feet down to Huckleberry Lake, the gaiters performing swimmingly with their silver wrapped cummerbund.   The end of the line for those generic, red, nylon rear entry gaiters was 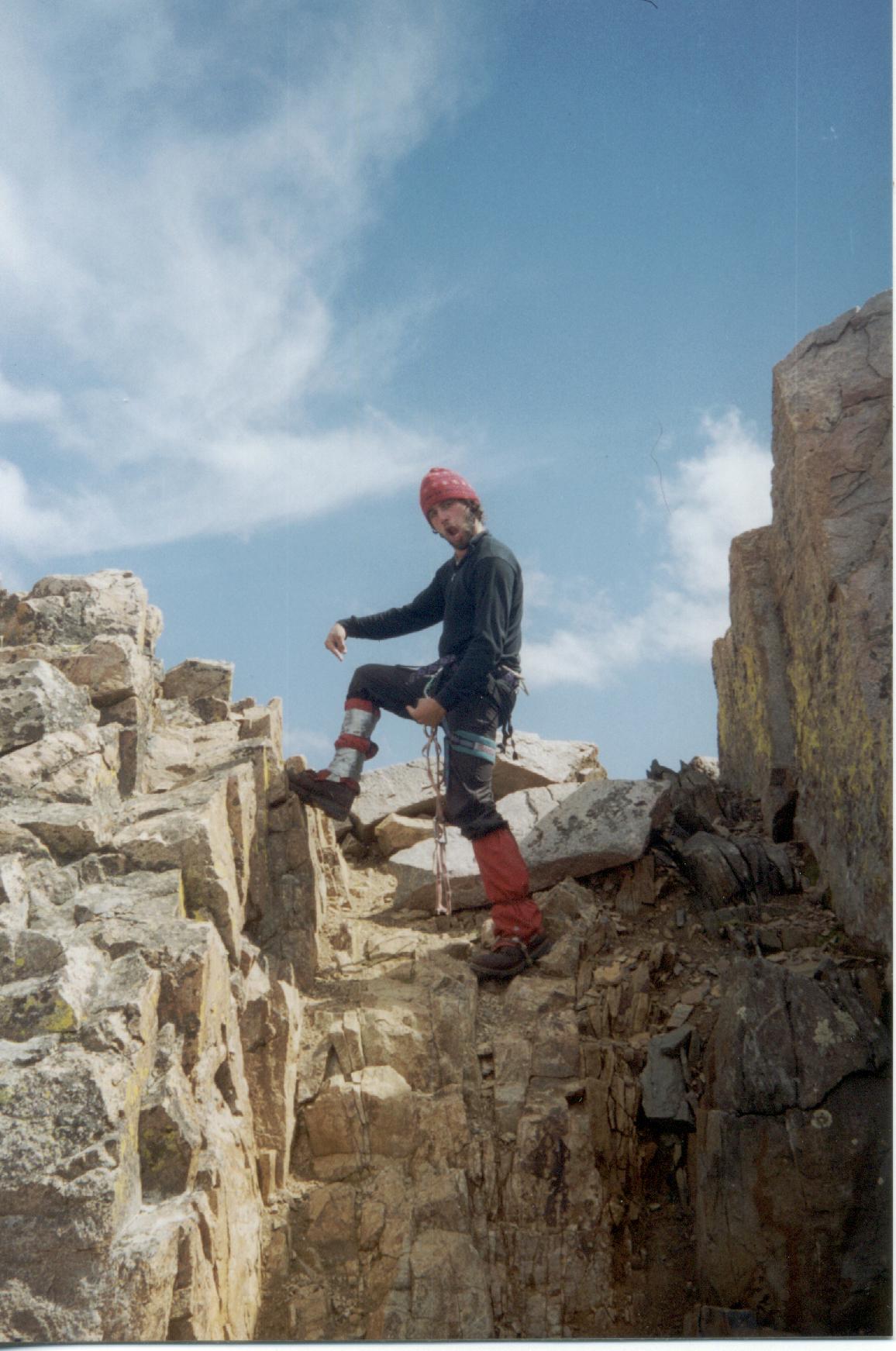 disappointing.  Having to “limp” them out and be retired, relegated to a box in my closet seemed sad.  Having them blow away or dragged off by a salt starved marmot would have been more fitting, as they had served me well for many years, being trusty companions on hikes and expeditions from the northern Rockies to the New England mountains to the Waddington Range in British Columbia.  I would have much rather have seen them KIA.

Getting those gaiters was no easy day.  Christmas morning commenced with us opening our stockings and there really is no doubt that I got many quality and coveted items, both out of the stocking and from under the tree.  When it was all said and done however, sitting on the floor amidst bows, ribbons, and torn wrapping paper I couldn’t help but feel my lower lip begin to tremble.  Standing in front of the beige Vermont Castings wood stove, my father, dressed in his usual jeans and flannel shirt asked me what was wrong.  “I really wanted gaiters and I didn’t get any!” I blurted without any thought or consideration, as the tears started to flow freely.  “I just wanted a pair of gaiters” I said again, my arms crossed, a sullen look on my face.  It was several minutes before he walked into the barn and came back with with a brightly wrapped package.  “Here you go” he said handing me the parcel.  A smile broke through my gloomy facade as I ripped the paper off this belated package, revealing a pair of red nylon gaiters.