“Yeah, my parents still live in NH, err, I mean my mother still lives in NH” I often find myself saying when someone asks if I have family in NH.  Then I hate myself.  How have I forgotten?   Fourteen years later and I am still saying my parents.  Fourteen years.

It is Thursday November seventh and I am walking down the hall on the first floor of Eastview at Unity College when I hear the distinctive chirp of  a cricket.  I know there is only one cricket in Eastview and that it lives in room 116.  I am on the way back from the gym, a workout session with Tom and a couple of others.   I pick up the pace with a skip, shuffling into a jog as make my way toward my room, wondering who it is.  I think it might be Jessica, as I was thinking about going back to Stark this weekend and maybe seeing her.  She is probably calling to make plans I think as I push through the doorway.   “Hello?” I answer, eagerly awaiting her voice.

“That is what your brother said too.”

The phone call that night set into motion a life of constant change and movement.  I 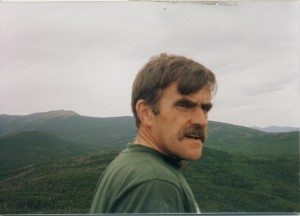 remember the last time I saw my father.  He and my mother had come over to Unity and we had gone up to Bangor and spent the day hanging out.  I remember having a good time.   I had bought a new pair of Adidas athletic shoes and a few other items.  When he left we shook hands.  I remember it was one of the first times I felt like he treated me like a man, almost as an equal.  It wasn’t said, but I could feel that he was proud of me.

In that moment I knew I loved my dad.   Feeling and recognizing that love manifested itself in more frequent midday calls home.  Calls when I knew he would be the one to answer the phone.  Then came the call.  And my new found love was ripped away.  Before I could tell him, before I could apologize for the things I’d done, before I could truly start to learn from him.  Somewhere, subconsciously, I knew I couldn’t do it again.  The wheels started to turn.

Four years later I graduated from the University of New Hampshire.  My third school in four years.  Not more than nine months in one place, just enough time to not get attached.  Seven years passed before Wayne County beckoned me to stay, to put down roots, to get attached. For reasons out of my control it didn’t work out and by default the transient lifestyle won out.  I still struggled with forming meaningful relationships.  Most people were kept at arms length, through humor and time; a lot of the former and not much of the latter. 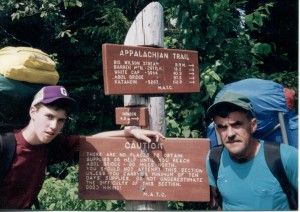 Fourteen and ⅓ years later I sit in Tucson, AZ and write about why  I still say that my parents live in NH.  Habits should be broken easier then that.  As I try in vain to comfort my best friend struggling with the feelings of confusion, sadness, and uncertainty surrounding  death, dying, and loss, I think about how I dealt with those emotions almost half a lifetime ago.  I am morose because for all the sadness behind my eyes, all I can truly offer is that time passes and with that, sadness and pain will diminish and happy memories will remain.   And that seems so useless.

Why do I still say “my parents?”  I say it because sometimes I forget.   I say it because time and distance push things away.  Not having to come home to the empty house or empty bed day after day after day, allowed me to only believe he wasn’t answering the phone.  It allowed me to not have to deal with it.  I say it because I never truly had to deal with loss.  To have it shoved and flaunted in my face.  I was able to run away, hide behind education, climbing, distance.  Yeah, I have dealt with it, but on my own schedule, not one forced on me by a myocardial infarction.  Its taken time, but I can see now that I really just wanted to control something.

I haven’t forgotten my dad but occasionally I forget that he died.  I don’t think of him every waking minute and many a sleeping minute as I did back then but I think of him daily.  I want him to see me now, see what he inspired.  I want him to continue to be proud of me, to see me chase my dreams.  I would love for him to help me build my first house, to see his grandchildren.   I know that won’t happen, but it helps me remember.