This is a rough draft of a chapter from the forthcoming guidebook that is to be published by Fixed Pin Publishing.

Eph Hanks Tower is named for Ephraim Hanks.  Hanks was a notable mormon pioneer who traveled across the country from Nauvoo, IL to California, partway with the Mormon Battalion of the United States Army.  He also served as a Station Master for the Pony Express, facilitating mail delivery near Immigration canyon in northern UT.  He is buried near his home in Caineville. This chapter documents four routes that have been climbed.  It is distinctly possible that more have been done on the lower escarpment of wingate, as it is possible to climb and wander elsewhere to rappel from a tree or other anchor.  Two of the routes are some of the best in the area.

Access:  These routes are accessed via the Scenic Drive in Capitol Reef National Park.  From the Torrey junction of UT-12 and UT-24, drive east on UT-24 9.6 miles to the Park visitor center.  Drive down the scenic drive 7.7 miles to where a dirt road turns right with a sign pointing to Pleasant Creek.  This is right before entering Capitol Gorge.  Drive two tenths of a mile down this road and park on the side (no real parking area.)  Climb the hill on the south and east side of the road up an obvious ramp and through a break in the chinle to a short white wingate wall.  See photo.  Once at base of short white wall, head right/south to the third and fourth route and head left/east to the second and first routes.  Should take about twenty minutes to half an hour.  Routes are listed left to right which is not necessarily the order encountered.  Alternatively it might be quicker to approach route #1 by parking at the pavilion/bathroom at Capitol Gorge and then heading up the wash to the south southeast.  Climb through break in the chinle and ascend scree to base of the route, about 25 minutes. 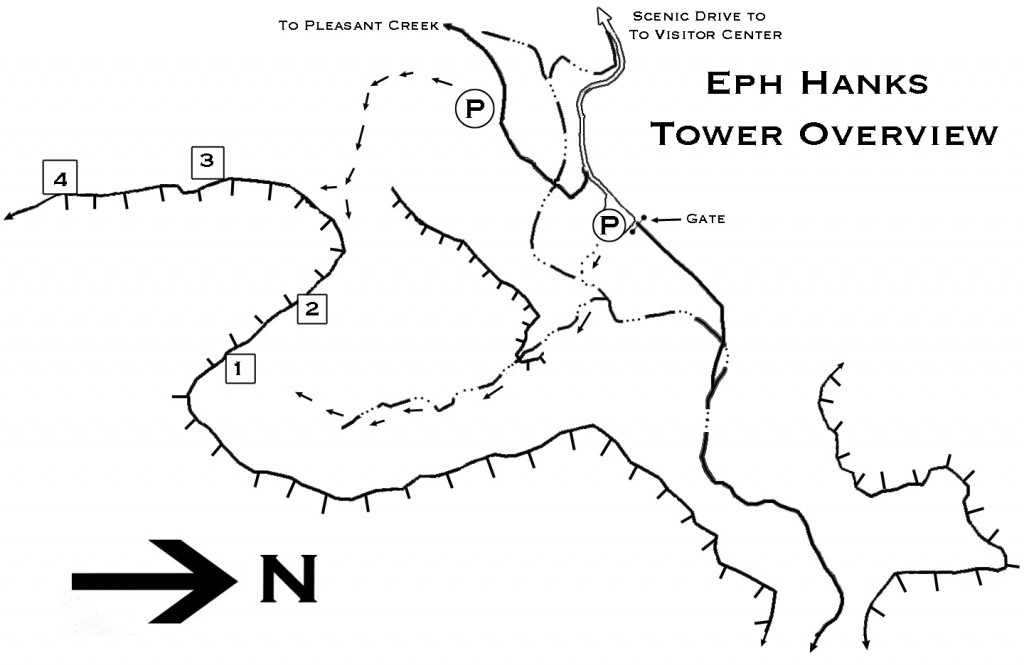 Location: This climb is located 300’ west of the back of the alcove where the wall of Eph Hanks Tower meets the south wall of Capitol Gorge.  It is roughly a five minute walk east/left of route #2 in  large white left facing corner.  See photo.

Description: Climb crisp, clean tight hand crack in soapy, white rock.  One of the best corners around.  Tight hands narrow to rattly fingers then fingers with a few good rests.  Widens up slightly towards the anchor.  Descend via a single rope rappel from a two hex anchor.  Be prepared to beef up or repair anchor.

Location: This route is located several hundred yards to the left of the northwest prow of Eph Hanks Tower.  See photo.

Description: Possibly one of the best thin hand cracks around.  Left facing corner.  Climbwide fingers up a lichen covered corner  This widens to a thin hand corner crack that passes through a small pod and climbs hands and tight hands to a hex & nut anchor just shy of a big ledge.  Rappel the route with one rope.  Be prepared to beef up or repair anchor.

Location: Fifty yards right of where the approach reaches the short white cliff band.  It starts at a nice belay spot between two trees, a pinyon and a juniper.  The route has dead branches overhanging the cliff top.

Description: A short splitter hand crack, with a bit of chossy rock at top.  Rappel from tree to climbers right

Location:  This route is located about ten minutes down (south) the cliff line from route 1.  Hike about four to five minutes to a taller white wingate face with a couple of dihedrals and hand cracks (unclimbed at this time)  This white tower faces west.  Continue past these routes and zigzag back up to the south side of the aforementioned tower.  The route faces south and isn’t obvious until you get underneath it.  See photo.

Description: Corner.  Hand to fist crack, to gear belay at pod.  Ascend up and right from belay and walk off right down gully (exciting).