Never Never Land (on being a NOLS instructor part III)

Being a field instructor for the NOLS is like  being in Never Never Land.

Most of us work hard to get here.  We build our resumes, pay for courses, usually a student course and an instructor course, then we land ourselves a job.  Others might come in through different paths, but most start as students. Maybe they start their time working for The School as interns, moving to in-town jobs as rations managers or admissions officers.  Some have the ultimate goal of being a NOLS instructor.  Then there are those who come to NOLS after having had nine to five jobs, successful careers in advertising, the military, banking, teaching, etc realizing that they want something more or something different.

I worked hard to get to Never Never Land, though I didn’t know that is what it was.   I started backpacking young, an outdoor education major in college, a NOLS Waddington Range Expedition, leading wilderness freshman orientation trips, facilitating experiential education curriculums in public schools, designing and leading outdoor adventures, leading wilderness backpacking trips, then finally, my Holy Grail, the instructor course.  I didn’t get work that fall after the IC, so I migrated to southern Utah, finding another similar place, another Never Never Land.  It did nothing to help me grow up, never forcing me to have to join the “real world.”

As a NOLS field instructor my life is pretty simple.  I work twenty-five weeks of the year in the field.  A lot of that is spent base camping at some of the western U.S.’s best rock climbing areas.  Some of the time is spent climbing mountains in the Wind River Range. 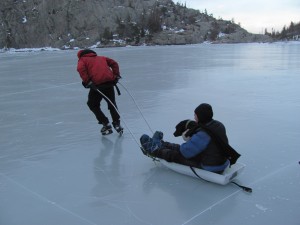 That leaves twenty-seven weeks of the year with which I can do as I choose.  I often choose to rock climb and base camp at some of the western U.S.’s best rock climbing areas.  I usually find myself climbing and co-conspiring about climbing with fellow NOLS instructors.  Full time work and twenty-seven weeks a year of NOT working.  There is not much there that encourages responsibility.   Like myself, many field instructors are itinerant, moving around, chasing the sun or the snow, not having a home, living in a truck or on a friend’s couch on Nevada Street, with storage units being their main address.

“When are we going to Svilar’s?” Gary asks me, leaning back in his green chair.
“Well I am going to City of Rocks tomorrow with Anna” I say as I stand in the office doorway.
“When are you getting back?”
“On the 23rd, then back to work on the 1st”
“Hmm, Tuhoy will be gone then…  Awww, you’re not going anywhere. You’re not planning on quitting or anything are you?  We got time”  he says with a wave of his hand, dismissing the idea that I would not be around.
“Nah, I’ll probably be around for awhile” I say trying to suppress a grin, because it is obvious he knows.

Many field instructors who work hard to get there move on eventually.  I had plans once, but they fell by the wayside.   Folks will work a few years as a NOLS instructor then move on, having lived out their time in Never Never Land.   More so than I some folks feel the weight of saving the world, family obligations, expectations or stagnation.  Some folks want more out of life than living in a tent, teaching the figure eight and showing folks how 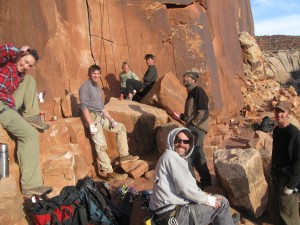 to dig catholes.  But some get seduced by siren sounds or sprinkled with pixie dust.  I did, but someday I too will tire, feel those weights and obligations and will move on from being a field instructor.

Some field instructors who want to stay around and involved with The School are lucky enough to land in-town jobs, maybe a ¾ time position, still allowing for some field work.  Some want to stay around because they believe in the mission.  Others because they want to pursue different challenges, maybe work more with instructors, and others because The School is a great place to work and there is often a good community.   Many of those who have built a life around the NOLS, have family and full time in-town jobs are still great examples of how to be grown up and responsible.

I know that even if I move on, I will not become one of those pirates, one of those who fight the lost boys, who tries to steal the magic of others.  One thing that being around the NOLS has taught me, it is that while growing older is inevitable, growing up is not.