I thought I had a good shot at meeting my 6 year old goal in the fall of 2011.  I was working a fall  mountain section in the WInd River Range that was only 16 days in the fields.  Our route put us at the base of Gannett Peak after only 10 days.  We got there after heinous post-holing through boulders, a lightening storm epic on Blaurock Pass and a beautiful re-ration day in the low country.   Heck, the Gooseneck Couloir’s bergschrund was hardly even showing, not too bad for mid September.  I didn’t however, count on the students not being quite ready.  So it did not happen.

Late this spring I loaded up my backpack once again and figured that I could pull it off, and I did.

***
I remember  my childhood well.  My father would eat peanut butter and jam with green olives for lunches, the olives making distinct lumps in the white bread.  Potato chips often accompanied the sandwich.  Later, I often rememberer the potato chips going into the sandwich.  For much of my young life I remember my mother making jars upon jars of raspberry and strawberry jam.  We had bushes and plants in our yard and I remember endless wooden quart baskets of berries being picked then laid out and processed on our wood stove and kitchen tables.  My father preferred the raspberry jam and back then I preferred the strawberry.  I still have an affection for my mother’s homemade jam  although these days i prefer the raspberry.

Throughout the school year my lunch was often brought from home.  While my brother would do the hot lunch in the cafeteria, I would go with a brown bag of fruit, sandwiches, chips , cookies, etc, usually opting only to buy  milk or fruit juice.  The sandwiches would range from baloney and ketchup to roast beef or tuna fish but peanut butter and strawberry jam was quite common.  Later in high school I drifted away from my mother’s homemade variety in favor of Welch’s grape with its delicious high fructose corn syrup.

The other part of the sandwich, the peanut butter, was never very fancy either.  It was usually Peter Pan or Jif.  Smooth or crunchy it really didn’t matter and still doesn’t.  The bread was never anything but white.

In college I was introduced to the PB&J’s cousin, the PB&H.  I never actually had honey until my friend Kami introduced it to me when I was a junior in college.  I loved the feel of the honey encrusted bread that happened after the sandwich had sat a while.  We had our fling.  Today I don’t reach for the honey first though.  It is more a sweetener for tea or oatmeal and often only goes into the sandwich if there is a critical jelly shortage.    While there is a certain enjoyment received from the honey encrusted bread, I get more satisfaction out of jelly soaked bread and the moist coolness that occurs when the jelly absorbs into the bread and it all gets smooshy. 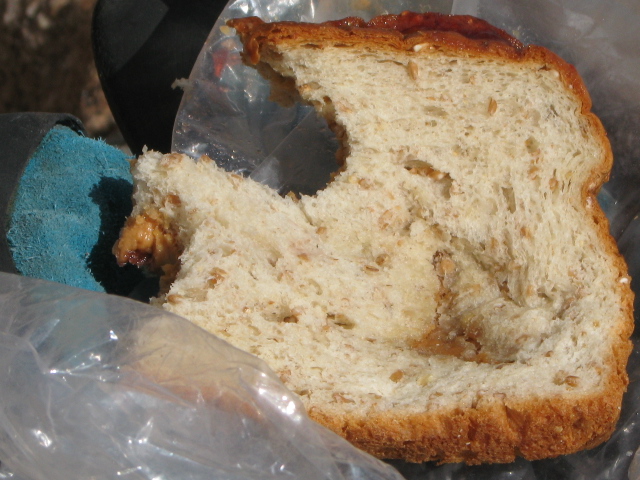 Other changes have occurred throughout the years of my love affair.  I have migrated to and from the natural style of peanut butter, from different flavors of jam and jelly and different kinds of bread.  My standards rise and fall with what is available, what my friends like, and how much money I want to spend.  Anna really likes raspberry jam, so when working or climbing with her that is the standard.  I still prefer my mother’s raspberry over store bought, so when not sharing and doing my own thing, it is usually  grape jelly. Scott enjoys a boysenberry jam.  These days though I try not to compromise on the quality of the bread.  I try to buy good, hearty, whole wheat or multi-grain bread.  Sometimes I will even make my own bread; this is always a treat.  Even with less wholesome fillings such as cheap PB&J the whole concoction tastes better.

While there have been simple changes in some of the basic ingredients, the actual construction the sandwich has remained pretty consistent.  Over the years I have experimented with different techniques, but have found myself mostly returning to my mother’s simple tried and true method.  As a youngster it was one slice of bread spread with peanut butter and the other slice spread with jelly.  They were put together and sliced vertically in half.  There was a time in grade school where I was into the diagonal slice, but today, much unlike my father at this age, I don’t generally slice my sandwiches in half.  I do however on occasion add chips or olives; people look at me weird for the latter.  I experimented with the peanut butter on both slices and jelly in the middle, but I found that to be too messy and void of the delicious jelly soaked bread.  I infrequently consume the toasted PB&J or the triple decker.  While both respectable variations on the original, I am not highly fond of either.

I can’t really come to any real number of PB&Js that I have eaten in my life.  Wikipedia sources a 2002 survey showing the average American will have eaten 1,500 of these sandwiches before graduating from high school.  That could be true, who really knows, but I have continued to eat these American classics throughout my post graduate life.  From my earliest memories of my dad’s paper napkin topped with a lumpy olive filled peanut butter and jelly and a glass of milk to the stacks of sandwiches I make before heading into the backcountry, this humble staple has been a life long food and fuel source.

“Anna want me to make you a sandwich?”   It is a common question when i embark on a a day of climbing  with Anna.  It is heard quite frequently at NOLS rock camps as well.  “The sandwich factory is now open for business, anyone want sandwiches?  How many?”  Loaves of bread spilled out on the tables, fixings and spatulas and used, empty plastic bags appear open and ready to receive stacks of sandwiches. Whether climbing rocks, running ultra-marathons, playing soccer, driving long distances, climbing mountains, riding bikes or anything in between, the roughly 530 calorie peanut butter and jelly sandwich has quietly and dependably nourished my adventures.  Now only if peanut butter were available in Patagonia…

So in early June of 2012 I stood at the sandwich bar in the kitchen of NOLS Rocky Mountain’s  Noble Hotel making sandwiches.  Two of the meat and cheese variety and three peanut butter and jellies.  I loaded them into a bread bag and tossed them into the bin marked WMT 6/16 JARED.  We had only 16 or 17 days until we would reach the Dinwoody Cirque at the base of Gannett Peak, which at 13,804 is Wyoming’s highest.    I thought I might have a chance.  About two and a half weeks later I clambered up onto the summit and after trading high fives with my students, sat down and ate my PB&J which no longer resembled a sandwich, but honestly, it didn’t taste any worse for the wear.