I can feel the vertical crease between my eyebrows getting deeper the longer I squint upward.  My partially closed eyes are not due to me ooking into the sun, but because it sorta keeps the drops of rain out of them.   It helps me see too.   Above me Pablo is stemming through a vertical pile of shit.  I suppose the half closed eyes help keep the moss, sand, pebbles and other debris out as well.

We are on an unknown, rarely climbed route on Escudo, a cliff on the outskirts of Coyhaique, Chile.  “What is it?” I had asked as we stood on the unstable, 45º pile of sliding scree that was its base.

“I don’t know” Pablo replied, quickly flaking the ropes.  “I saw some slings up there earlier.  The first pitch looks low angle.”  He obviously has more confidence than I.  Which makes sense, he is a better climber.

“Do you know the rating?”

That it is rarely climbed is obvious from the ground, for I can’t even tell where the route goes.  The face is carpeted with grass.

It seems dubious from the start, but Pablo picks his way up through grass filled cracks and hollow sounding rocks.  There is a light breeze and a consistent smattering of rain drops.   I stamp out spot in the scree slope, a transient, ephemeral spot, close to the wall and watch him traverse above me.  I am hungry for the security of a protected belay, but there is nothing to satiate me.  I just step closer to the cliff.

There, at least according to Pablo, is not really any guidebook for Coyhaiqe rock climbing.  So I seem to ask “what is this?” or “what’s it rated?” a lot.  While I am not a ratings snob, at least toward the hard routes, it does help me get on things within my ability.

Being okay with not knowing, whether cragging or multiple pitch climbing, is a good skill to hone.  Standing there on the sliding hill, tucked in close to the wall as Pablo climbs the choss, grass, lichen and decent rock above, I recognize that this is what I need.  Despite my aversion to generally unnecessary discomfort or risk, and my “if you are gonna be dumb…” mantra, this low knowledge, front country choss wrangling is good for me.  I have spent many months, and much time and money trying to get to some remote Chilean valley in which I will explore the unknown.  Guidebooks have made me mentally soft.  So here, 500 meters from the road in a relatively developed climbing area, I kind of find it silly and a bit out of sorts to be choss wrangling.  But I am on the dull end of the rope.  So I peer upward into the growing rain and breeze while gravity fueled drops find their ways into my eyes.  I will climb up and I will lead the next pitch.  It will be good for me.  I will hone and practice the unknown, the onsight, both mentally and physically.

From above Pablo lets me know he is secure.  I take him off, slip on my shoes and feel the rope come tight.  I toss my backpack and shoes into a thorny bush and start upward.  The climbing is as expected and I marvel at the hollow rock and the moderately impressive friction that can be attained on this basalt.  I pull through a small roof on a thin hand and fingers splitter, trying to keep in mind the moderately impressive friction available to me elsewhere.  Almost a decade later I am finally kicking the poor habits acquired at the Creek.  Higher, the angle kicks back a bit and I scramble up to Pablo and clip in.  “Nice work, cool head” I offer up.  “Where do I go from here?” I ask.  Above vertical cracks are stuffed with grass and the caras graced with lichen.  Pablo points to a bolt 25 meters up and left and to a roof above. 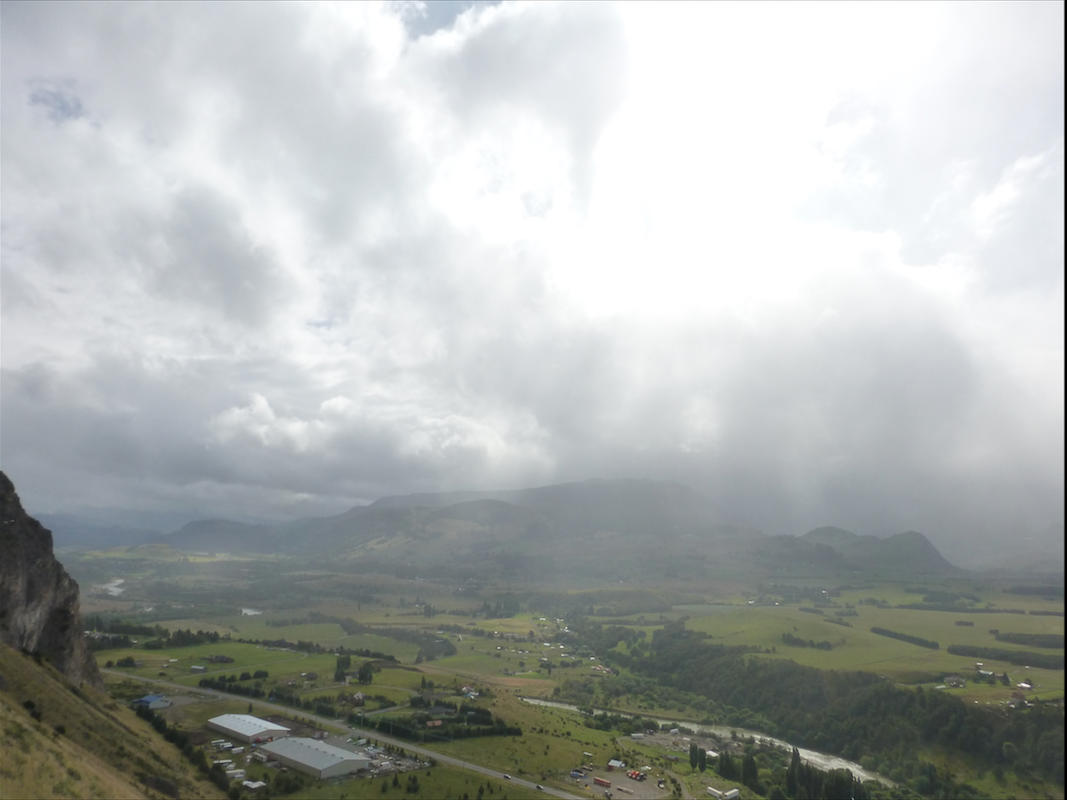 “I think it goes up there and then the crack above”

“Alrighty then” I say, looking down and rearranging the gear on my harness.

“You are on the bad end” he says, referencing me being tied into the end with the recent core shot.  “I can lead it or we can switch ends.”

My heart skips a beat.  It is a moment oft truth.  “No seriously, I don’t mind” he adds.  It looks hard, but I can do it, least ways I need to try.  Around us the drops swirl here and there while the sun paints its waning light over the verdant Valle Coyhaique.  I look for a rainbow, but find none.

It will be quicker to just re-stack the ropes, I rationalize.  “Well lets get it done.”  And a part inside of me dies, shrivels up and cracks and falls into my inner emptiness.  I pull the ropes off his feet, re-stacking quickly while he re-racks.

For me it is nothing new.  I took the easy way, as so often I do in life.  Despite my espousal of  “the hard easy” wisdom, in the climbing realmI find dedication to that mantra hard.  Hard isn’t always fun and fun is at least what I say outwardly about why I climb.  But it eats away at me, like the blowing rain, pecking at my insecurities, it melts my resolve, like a disintegrating wall of brown sugar.  The death inside, it hurts.  I have lost a piece of my existence, a piece of who I want to be, put another brick in building someone I would rather not be and time is running short in this one life I get to live.  “If not me, who and if not now, when?” failed me today.

It looks straight forward enough, but Pablo grunts, stems and swears his way upward.  Once again I find myself looking upward intent on minimizing any vuelito that might occur as he inches upward, with what for me, is unknown gear in unknown rock.  The bolt is clipped, choss navigated, the roof approached.  His movements are calculated and seemingly probable.  He makes the unknown seem doable.

It is another 57 meter pitch.  Not long after the “five meter warning,” Pablo stems a gap, pulls out a cordelette and slings something.  I hear a “ belay off” come down to my tuned in, turned up ears.  I throw on my long awaited wind breaker and head upward.  Despite the death inside, twenty meters up I am glad I let Pablo lead the pitch.  That thought shrivels my ego however and does not help me sack up for the “if not me, who…” mantra.  Data points.

It is delicate, flaky, and loose with occasional gear that is tricky to place.  Below the roof a stack of loose blocks inspires little confidence, but the distance between pieces of protection shows a cool head and dedicated hand in my partner.  I make the moves and follow cleanly, which feels good.  The mixed emotions of failure, inability and acceptance however weigh me down as I move upward.  I pull onto the ledge and offer up the habitual high-five.

Writing this now, seven months or so later, I can still feel the sadness and the relief.  They battle each other every day.  Even after climbing for over 17 years I can not tell what I like better, the relief of being done with something or the ego boost that comes from doing something.  I don’t want to fail, and I don’t want to let my partners and friends down.  Maybe some day I will figure it out.

Any thoughts? I'd love to hear from you! Cancel reply

This site uses Akismet to reduce spam. Learn how your comment data is processed.